A wish list for what Apple should (but won’t) announce for the Apple TV for this year’s holidays.

(Update: lots of attention and pointers back to this little musing, including Fortune and CNNMoney in addition to a slew of Mac fanzites. But just for clarity and for posterity: this was a wish list, not a prediction.)

Rumors swirling around Apple’s “Let’s Rock” event this coming Tuesday generally focus on an expected fourth-generation iPod Nano (roundier and with a bigger screen), iTunes 8.0, iPhone 2.1 software, Mac OS X support for BluRay, and other tidbits. And whether they reached their goal of 10M sold iPhones in 2008 (or 12.8M, as the case may be).

I hope there will be more surprises than that. And I’m not talking about overhauled MacBooks or spruced up iMacs. I want Apple to roll out a new Apple TV. In fact, I’ve been delaying setting up a new cable/DVR/HD solution in my new digs because I was sure that Apple would come out with something new. Unfortunately, as I surf the global echo chamber, I see little if any indication that an Apple TV 3.0 is in the works.

Steve Jobs has said that Apple has three legs to their stool – the Macintosh, the iPod, the iPhone – and that they are hoping for Apple TV to become the fourth leg. Well, in all honesty, all the legs are looking pretty solid to me. Except for the fourth one.

This post is my way of saying a prayer that Steve really will rock us this week. 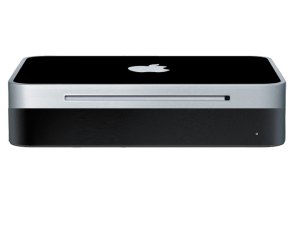 Here’s what I am hoping that Apple will announce: a new generation Apple TV that would take the current Apple TV features and add a HD (“over-the-air ATSC”) tuner, a Blu-ray player, and a big hard drive with DVR and Time Capsule features. And maybe toss in the ability to buy simple games on the iTunes store, like for the iPhone, making the box also work as a low-end gaming console. But I can live without that last part.

Here’s the thing. On February 17th, 2009, old televisions will “go dark”. That’s the date the FCC has mandated full-power broadcast television stations to switch to DTV (dtv.gov). So this coming holiday shopping season will be the first (and last) that faces an upcoming all-digital year.

Similarly, it will be the first holiday season following a resolution to the next-generation DVD format battles: Blu-ray won.

Add to this the overall lackluster response that Apple TV has received to date, and it would seem that now’s a good time to roll out a new shot at the living room.

In fact, adding Blu-ray to the Apple TV was rumored in the NYT back in January at the MacWorld Expo. Instead, Steve announced the iPhone 3G, iPhone 2.0, Apple TV 2.0, Mobile Me, and a bunch of new iPhone apps – altogether not a bad keynote.

A Blu-ray version in January would have made little sense, anyway. It’s clearly a consumer product, and overshooting the holiday season is not the way to launch. But more importantly, the HD DVD vs Blu-ray war was only just being decided. Warner Brothers announced that they would not support HD DVD in January (making Paramount look foolish), and were shortly followed by similar decisions by Netflix, Wal-mart, and Best Buy. HD DVD officially cried “Uncle!” in February, when Toshiba surprised everyone with a perfectly clear press release.

By the way, the right format won the war. In a nutshell, the difference between HD DVD and Blu-ray was that HD DVD was trying to re-use older DVD technology to lower the cost of retooling the industry, including allowing for cheaper players. Blu-ray, on the other hand, tried harder to make good use of the possibilities of the new blue-colored laser LEDs that powered both standards, so across the board Blu-ray was a better technology. So in the end, the VHS vs Betamax analogy was flat out wrong: the better technology won the day this time. So much for the theory that Microsoft calls the shots. And the pundits that said “In this kind of battle, the guy who is out there first and cheaper is going to be the winner; the more expensive and later one is going to be the loser”? Wrong, too. (Names omitted to protect the overconfident.)

And yeah, no need for CableCard support; let’s see a pure Blu-ray and iTunes solution. Dare one wish for a new channel through iTunes of bringing free, advertising-supported digital video? Games would be neat, too, and useful commercial widgets, especially now that the iTunes store pretty much has the infrastructure in place.

It would also be nice if it seamlessly supported iPods and iPhones – so that you technically would not need another computer in the house besides this one.

And full iChat support with a webcam connected to the USB and Bluetooth so that I can voip conference off my TV screen while watching CNN in a box … ok I’ll stop now.

And the coolest thing of all? If I’m watching a movie with the sound turned way up, it would gently pause when my cell phone rings.

The battle for the digital living room has not been settled yet. After both Sony and Microsoft have mostly fumbled, there is an amazing opportunity here. I’m only hoping Apple will seize it.

CORRECTION: Readers have pointed out that the $40 rebate specifically does not cover devices that have other features (under rule 2e).

Ok so it’s kind of cool that if you do a Google search on “Apple TV 3.0” right now, 5 out of the 10 top hits are all this blog posting. But it’s kind of sad, too, since it points to the low level of interest in what’s up with the “fourth leg”. Notably, the Apple 2.0 column at Fortune picked it up for a morning piece, so there are a bunch of comments on that site. But this is my blog so I’m responding to them here. So here are some updates/clarifications, in no particular order:

Phew, I think that addresses most points. Thanks for reading and commenting, y’all.

UPDATE (after the event): What, no “and one more thing?”. The iPod improvements look cool, and all, but I am obviously disappointed. I guess I need to call Comcast or AT&T now, after all …